We are a Community of Warriors.

Warriors are resilient and respectful; inclusive and integrous; commited and compassionate; honest and just.

Track and Field - Male and Female; All grades

Softball - Male and Female; All grades

She attended Westminster Junior High for three years from 2012 – 2015. In Grade 7, she tried out for the Westminster Senior Girls basketball team and you could tell that she really wanted to be a basketball player. Fernanda was a determined and driven athlete who made the most of her practice time. She did not play that much in Grade 7 as she sustained a severe ankle injury at the start of the season but that did not stop her. She showed up each game and played her hardest. That came to be the hallmark of Fernanda - always giving her very best no matter if the score up 30 down 30; she was always giving 100%.

Fernanda was a great teammate. She always had a positive attitude, encouraging and helping her teammates in every way. She had the heart of a champion who met everyone with a huge, welcoming smile.

Fernanda scored at will and for the city final game, the other team spent their practices working on ways to stop her.  When Fernanda left Westminster to go to high school after 3 awesome years on the Westminster, her team’s record was 70 wins and 8 losses with 11 Gold medals.

In July 2016, while Fernanda and her mother were visiting their family in Mexico City, Fernanda passed away in a tragic car accident.  She was a wonderful young lady who met everyone with a huge welcoming smile.  She was smart, kind, athletic, positive and will be missed by everyone who knew her.

Fernanda was and always will be a Warrior.  Congatulations to Abby Hui, Imogen Maxwell, and Eden Harrison, all who have won the the Fernanda Salinas Sanchez Leadership Award over these past three years! 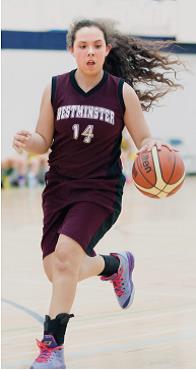